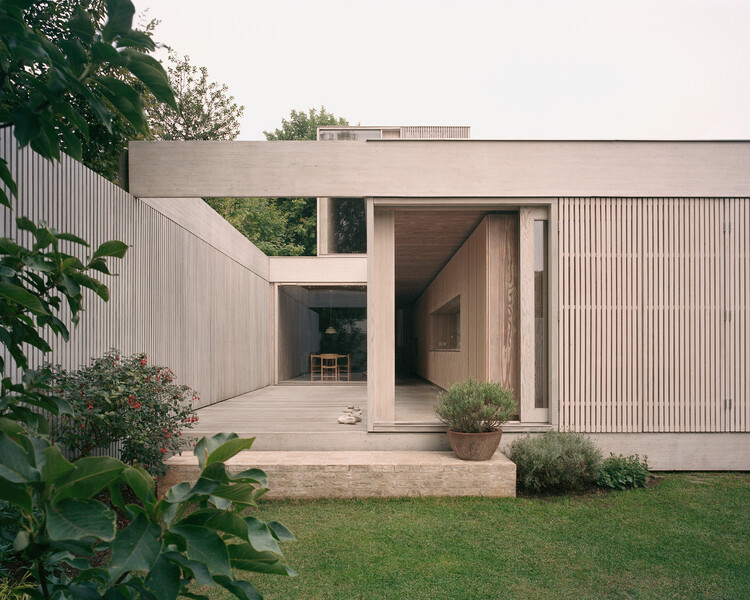 Text description provided by the architects. This recently completed family home and the studio is situated within the Miltons, part of the Highgate Conservation area in the London Borough of Haringey. The 200m2 site, accessible via a narrow passageway, was previously an old garage and rear garden of an adjoining house.

Although amidst a conservation area and surrounded on 4 sides by a predominantly Edwardian context, the local planning authority was keen that the project reflected the nature and grain of its less formal backland location. Statutory setback requirements and overlooking on four sides impacted the eventual design of the interconnected interior and exterior form.

Limited access influenced materials selection and construction methods; all had to be of proportions and weight that could be carried or trolleyed by hand into the mews. These challenges were seen as an opportunity to create a home that eschews familiar London domesticity. Whist its interior layout and construction are a direct response to living requirements and location, its character and atmosphere derive from memory and experience and the desire to create an escape from the world outside.

Layout. The completed 127m2 home, arranged over four slightly separated levels, follows the natural slope of the site. Its form, a series of interlocking orthogonal volumes, is the product of the original 5.1-meter garage width, the proximity of adjoining structures, and required setbacks. All rooms and spaces are organized around a 20-meter-long axis, starting at the front door and running through to the rear boundary. An outdoor terrace and walled garden, feel as much like rooms as those of the interior.

Set back from the carriageway, the front of the new home is in line with the original garage. The entrance volume comprises a guest bedroom, double-height second bedroom, circulation, and bathroom. Beyond, and slightly lower than the entrance, an informal living, dining, and galley kitchen open out onto a terrace and look towards a walled rear garden. A lower ground level studio, directly below the entrance, receives light from the front façade above. The master bedroom and bathroom are on the topmost level, and a glazed stairwell brings light into the interior.

Construction. The timber frame construction is faced in the brickwork where it meets a boundary, and the remaining exterior cladding is from Siberian Larch.100mm wide Douglas fir boards, with the aligned floor, wall, and ceiling joints, line all interior surfaces. Fenestration framing and shutters are also from Douglas fir. All timber is from sustainable sources and is carefully capped with stainless steel to control exterior weathering. All roofs are covered in lightweight Lipari pumice stone, to aid drainage and reflect heat.

Furniture, including desks, beds, shelves, cupboards, and doors are made from the same Douglas fir boards as the interior lining. In contrast, Kitchen work surfaces, bathrooms low tables, and niches are surfaced with matt white porcelain. The front forecourt, paved in reclaimed granite cobblestones, matches the mews carriageway. The garden, in keeping with the home, is informal.

The project combines high levels of insulation, an air source heat pump, underfloor heating, LED lighting, Induction cooking, and provision for a future Photovoltaic array. All roof water is gathered into a below terrace storage tank for domestic and garden use.

The context, planning process, and hardships involved in creating this project are typical of London. The finished home, although a product of this reality, is also a refuge. It is relaxed, informal, and a constant reminder of the lives and character of its occupants.